The union of body, mind, and spirit.

Bringing connection to the body, mind, spirit and emotions.

Connecting to the spark of the divine within you through dynamic meditation.

Purna Yoga classes help you live your life by bringing freedom and openness into your body, unity to mind, body, and spirit, and equanimity to your emotions, while giving your spirit a chance to shine. 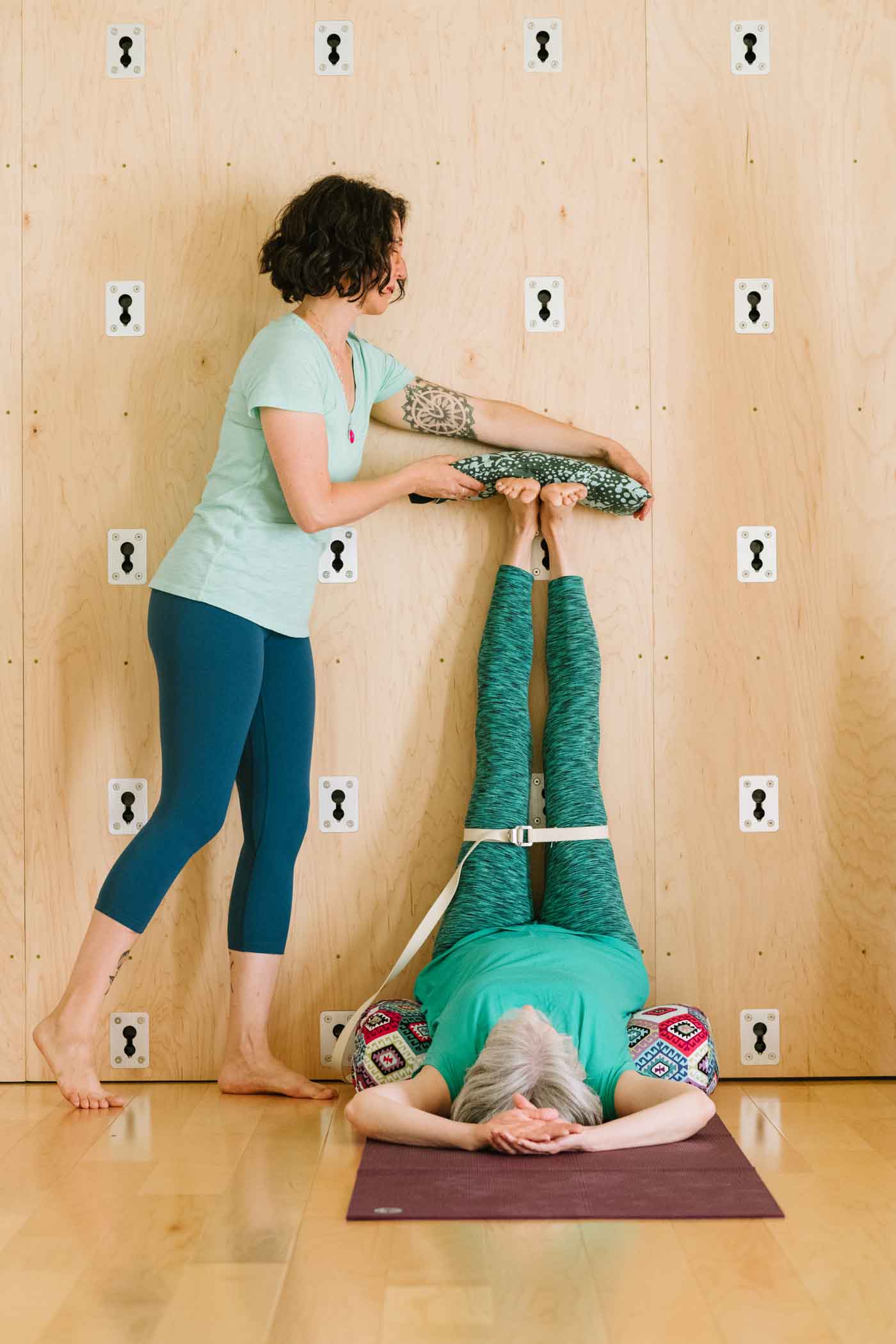 How does Purna Yoga® bring union to the yoga practictioner? We believe that yoga is more that just physical exercise. Purna means complete. Purna Yoga addresses the entire you: body, mind, emotions, and spirit, because you are more than just your body.

Purna Yoga utilizes Asana (poses) and Pranayama (breathwork) so that the body can be strong as well as flexible. So we can move through our daily life with ease rather than be burdened with physical discomfort. Purna Yoga is alignment-oriented and rooted in co-founder Aadil Palkhivala’s 40 years of study with B.K.S. Iyengar. Nutritional knowledge and an understanding of how lifestyle choices affect health are also aspects of study. We draw on the best of Ayurveda, Chinese, and modern medicine to support the health of the body beyond just the physical practice of asana.

Purna also offers a unique form of guided meditation, developed by co-founder Savitri, through years of experiential study. Heartfull Meditation helps connect you with who you truly are within. Through simple, practical, easy-to-learn techniques, you can set your focus on what really matters in life. Purna honors the traditional texts of yoga (the Vedas, Upanishads, The Bhagavad Gita, Hatha Pradipika, the Yoga Sutras of Patanjali, the writings of Sri Aurobindo) and applies them practically to modern living.

What can you expect from a Purna Yoga class?

Letitia’s friendly yet firm teaching style provides students with a community-oriented, non-competitive setting in which to practice, change, grow and progress. Her clear, anatomically-oriented instructions, engaging personality, and sense of humor work together to make classes light-hearted and fun even in the midst of challenging, disciplined work.

“This two year program has deepened my yoga practice, improved my teaching, and helped me live my purpose. Purna Yoga has been the most effective method I know of answering the question first posed by the Young Lions Conspiracy: ‘What are you doing to participate?’

“My focus in teaching is to use my anatomical knowledge to demystify poses so students may find the alignment of the pose as well as freedom and openness in the mind and body. I see practice as just that – practice – and encourage students to work at their current level in order to reach the next one. Asana practice, for me, is never about performance or perfecting of poses but instead focuses on feeling more at home in the body you have now and to connect with the deeper benefits of yoga.

“As Sri Aurobindo reminds us, ‘All life is Yoga.’ How we live in this world, the relationships we foster, the way we treat our fellow human beings, the planet, and all the creatures that live on it, these are all part of living yoga. Let’s practice together and let who we are be supported by that practice and each other, so we can work together to keep on evolving.” 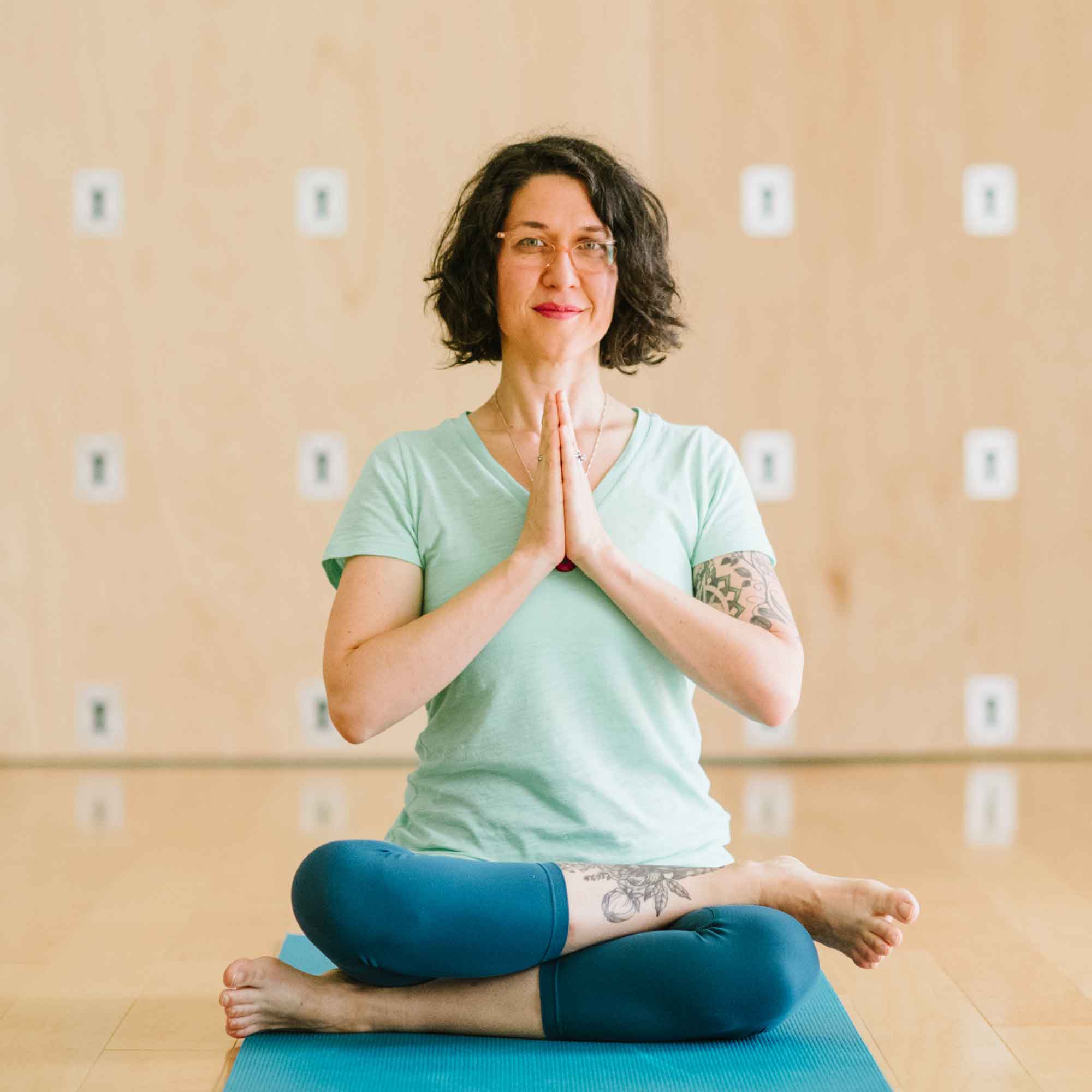 My inspiration to teach yoga comes from the desire to share my own yogic path with my students. To share the ways in which yoga has helped me become more of myself: healthier, happier, balanced, and loving. 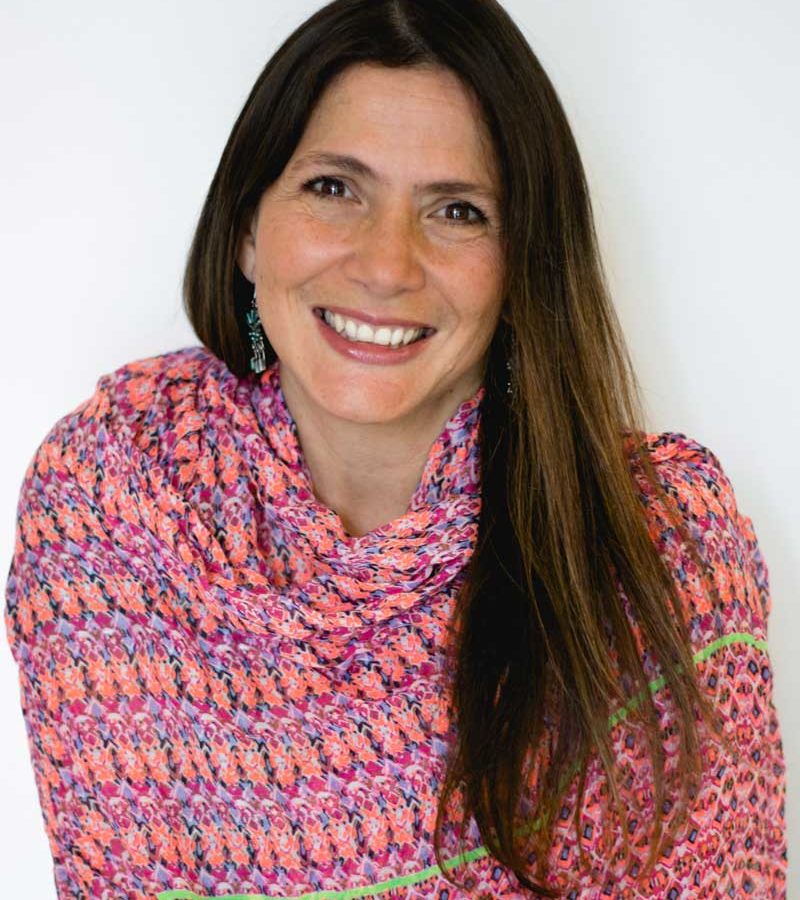 Mili and Letitia took their first teacher training together in 2003 and have been close colleagues ever since. Mili’s classes combine alignment awareness, strength building, and a meditative mindset. With her soothing voice and gentle smile, Mili brings a peaceful intention to her teaching, encouraging exploration and a sense of curiosity in her students as well as a commitment to work deeply.

Continue Reading →
“When you practice, it is always an opportunity to ‘go deep’ while still being playful. I hope to help you find your inner smile, your inner power, your inner light.”

Mili’s training began with a 200 hour and then a 500 hour certification with Lillah Schwartz. She has studied with several outstanding teachers including Matthew Sanford, Gabriel Halpern, Roger Cole, and Simon Marrocco. She has been studying with Aadil Palkhivala since 2004 and Savitri since 2007. After years of having it as a life’s goal, she completed her 500 hour certification through Purna Yoga College in 2017.

“Aadil and Savitri’s teaching have really given me tools that helped me overcome difficulties in my life, to live a life of integrity. One of the things that really touched me about Aadil’s teaching – not just the asana — was the focus on lifestyle, the things you are choosing to do, and how all life is yoga. I wanted to take his teacher training for years, because he has so much knowledge. But I was feeling like I didn’t have as much time to devote to my ‘yoga career’ because I was raising my young child. I brought this up to Aadil, and he told me that raising my child was my yoga at that time, and he showed me how being a parent was practicing all aspects of Purna Yoga. So when my child became big enough and I finally had the opportunity to train with Aadil, it was a dream come true.” 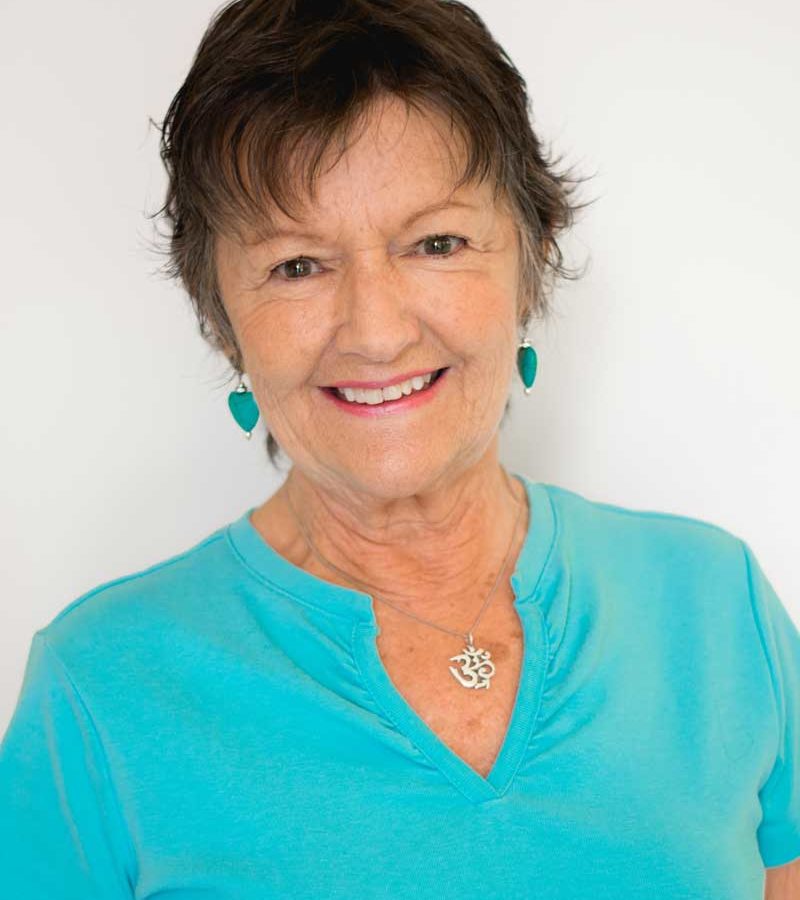 Gea Skeens has seen the world of yoga change a lot since first becoming interested in it. Her first exposure to the discipline was watching Richard Hittleman’s Yoga for Health television program on PBS in the early 80s.

“I was teaching aerobics in Charleston at the time. There were certainly no yoga classes available. I became a real devotee of his program and started incorporating his teaching into my classes. He used to say, ‘You have to be as flexible as you are strong and strong as you are flexible.’ I’d never heard someone talk about exercise like that. The idea that exercise could be active and relaxing at the same time was a real game changer.”

When Gea moved to Asheville in 1989, she discovered Lillah Schwartz’s studio. At the first class she attended, Lillah wondered aloud if anyone might be interested in taking a teacher training class, as she was interested in starting one. Before she knew it, Gea raised her hand. She has been involved in yoga in Asheville ever since.

She first practiced with Aadil Palkhivala in 2004 and was taken with his gentleness and kindness, which was in marked contrast to the stricter sense of discipline found in more traditional Iyengar teaching. She realized, studying with Aadil, that yoga is an organically evolving idea, always changing.

“Yoga always seems like it’s changing and growing. At one point I thought I knew everything there was to know about Downward-facing Dog, but I have learned since that was not true. You can always learn more about and from yoga. One feeling that I always have when I am teaching and practicing yoga is a real sense of gratitude. It really helped me understand that a sense of spirituality has nothing to do with ‘religion’ exactly. Spirituality is connecting with your true self, and your true self, ultimately is pure love. Yoga taught me that.” 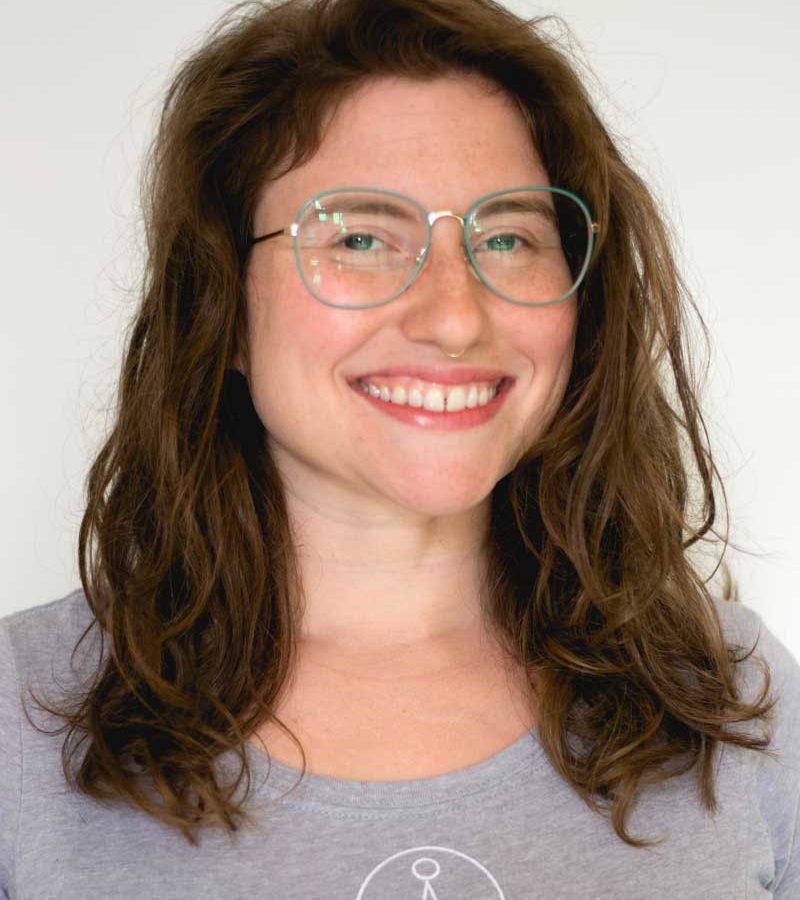 Hannah received her 200 Hour Certification from Purna Yoga College in May of 2017 from Purna Yoga East, in Clayton, NC. In addition to the Saturday pay-what-you-can class, she teaches Purna Yoga Basics on Monday nights. Her enthusiasm for Purna Yoga is contagious and inspiring and her teaching style is very accessible and easy to follow.

Hannah discovered Purna Yoga when her sister recommended one of Letitia’s classes three years ago. “I was hooked the first class I came to! Letitia invited us to show our bodies gratitude. I’d never heard that thought process before. Most exercise is about pushing our bodies to become something they’re not. This was way more welcoming—I found this invitation to acceptance to be very liberating.”

Hannah says she decided to become a teacher because she really wants to help people feel accepted for who they truly are and to connect to the love they have for their entire self—their bodies, their hearts, their minds. “There is so much pressure to be externally motivated in the world—I would really like to help people connect with their internal motivations.” 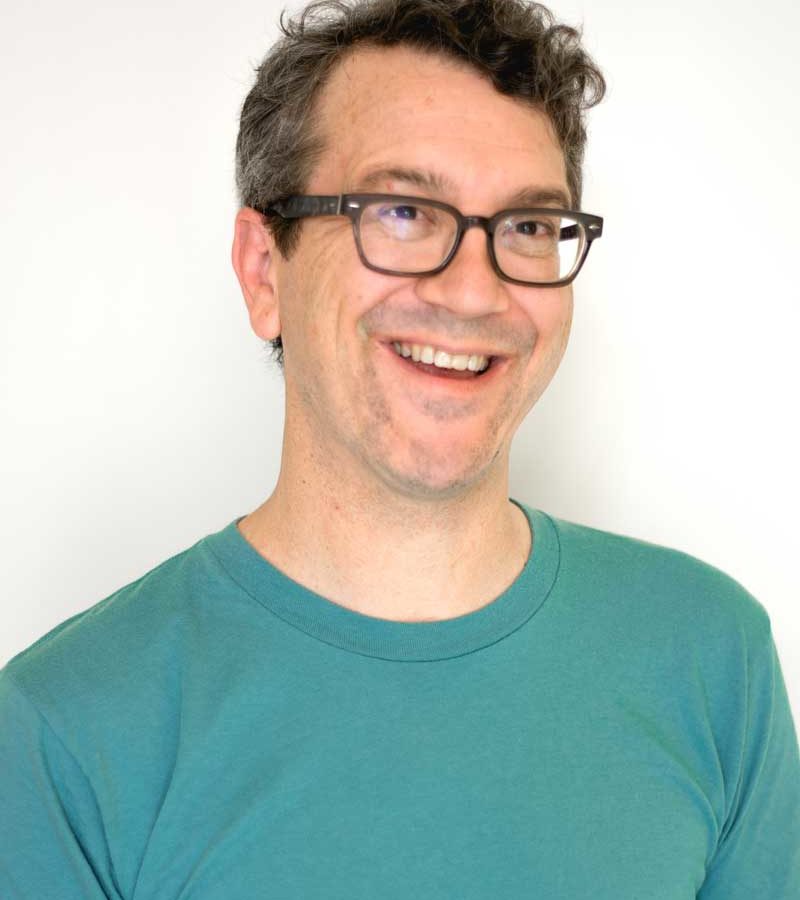 Letitia’s husband Whitney received his 200 Hour Certification from Purna Yoga College at All Life Is Yoga studios in Atlanta, GA in 2017. He has been teaching for nearly two years and has been practicing since 2004.

“I started doing yoga because I felt I needed some kind of exercise regimen. I’d always been bookish and it seemed like I ought to do a token something for my physical health. What I discovered, once I worked through the basic transformation from an inactive to a more active body, was that yoga as a discipline also had positive mental and emotional benefits, in addition to the more commonly perceived physical ones.

“What’s exciting about Purna Yoga is that it addresses the entirety of a person—the mind, the body, and the spirit (or whatever you want to call it)—and it does so in a very specific and practical way. It has connected me more with movement and physicality, has balanced out and engaged me more with my emotions and instincts, and has taught me a lot about seeing perspectives other than the ones running around in my head.

“I am a DJ as my ‘night job’, and yoga has helped me curb some of the unhealthier parts of that occupation. It mitigates the constant changes in my sleep cycle that come from working late, as well as some of the emotional hazards that go along with that. I’d definitely recommend it to anyone working late shifts or dealing with jobs surrounding, say, food and/or booze, which is, of course, most of Asheville. Also, as far as I can tell, it’s good for record nerds. And it’s made me a lot better dancer!

I want to receive the newsletter!